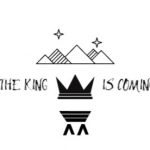 11 But after three and a half days, God breathed life into them, and they stood up! Terror struck all who were staring at them.

12 Then a loud voice from heaven called to the two prophets, “Come up here!” And they rose to heaven in a cloud as their enemies watched.

13 At the same time there was a terrible earthquake that destroyed a tenth of the city. Seven thousand people died in that earthquake, and everyone else was terrified and gave glory to the God of heaven.

14 The second terror is past, but look, the third terror is coming quickly.

15 Then the seventh angel blew his trumpet, and there were loud voices shouting in heaven: “The world has now become the Kingdom of our Lord and of his Christ, and he will reign forever and ever.”

16 The twenty-four elders sitting on their thrones before God fell with their faces to the ground and worshiped him.

17 And they said, “We give thanks to you, Lord God, the Almighty, the one who is and who always was, for now you have assumed your great power and have begun to reign.

18 The nations were filled with wrath, but now the time of your wrath has come. It is time to judge the dead and reward your servants the prophets, as well as your holy people, and all who fear your name, from the least to the greatest. It is time to destroy all who have caused destruction on the earth.”

19 Then, in heaven, the Temple of God was opened and the Ark of his covenant could be seen inside the Temple. Lightning flashed, thunder crashed and roared, and there was an earthquake and a terrible hailstorm.